Book Tour Review for the book Blood of the Prophet. 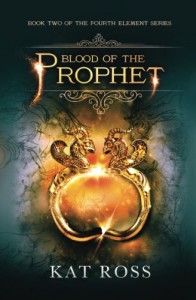 The Prophet Zarathustra has been called many things. Now he spends his time drawing pictures of weird-looking goats. That’s what happens when you’ve been stuck in a prison cell for two hundred years. But the man who might be mad, and is definitely supposed to be dead, has suddenly become very valuable again…

It’s only been a few weeks since Nazafareen escaped the King’s dungeons with her daēva, Darius. She hoped never to set foot in the empire again, but the search for the Prophet has led them to the ancient city of Karnopolis. They have to find him before Alexander of Macydon burns Persepolae, and Darius’s mother with it. But they’re not the only ones looking.

The necromancer Balthazar has his own plans for the Prophet, and so does the sinister spymaster of the Numerators. As Nazafareen is drawn in to a dangerous game of cat and mouse, her newfound powers take a decidedly dark turn. Only the Prophet understands the secret of her gift, but the price of that knowledge may turn out to be more than Nazafareen is willing to pay… Kat Ross worked as a journalist at the United Nations for ten years before happily falling back into what she likes best: making stuff up. She lives in Westchester with her kid and a few sleepy cats. Kat is also the author of the dystopian thriller Some Fine Day (Skyscape, 2014), about a world where the sea levels have risen sixty meters. She loves magic, monsters and doomsday scenarios. Preferably with mutants.

I thought this book was even better than the first one. And of course another person I really liked a lot had to die. While the death in the first book was sad, the one in this one was heartbreaking.

I really loved Darius and Nazafareen relationship in the first book but wow it's even more intense in this one. I don't really like Darius's mother at all, Maybe that will change in the next book. One thing I didn't like at all is that Victor doesn't have hardly any book time in this book.

I am torn when it comes to how I feel about Balthazar. I know his done a lot of bad things but it seems like his not happy with some of the things he did. I also think his not really into hurting the Prophet. So I hope that he switches sides in the last book.

And of course I can't stand Queen Neblis at all, she is a really awful individual. I don't feel like she has any feelings at all. Maybe at one time in her life she did but not anymore. I do think Victor is the only one she has feelings for and that is hate. But at one time it probably was love.

I hope in the last book Victor plays a bigger part in the book. Like I mentioned above that's what upset me, and that's why it got half a star taken off.

I got this book for free for the purpose of giving my honest opinion on how I felt about this book. And for taken part of the book tour for this book.